“Our youth and adults grew in faith and hope as we created a marvelous Christian community for a week.” 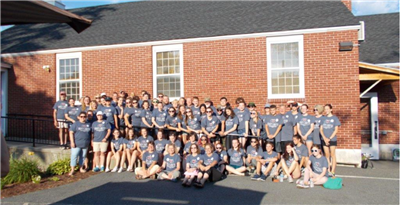 We built one massive handicap ramp, and probably the most complicated project was on a steep hillside that required multiple platform steps down the steep side of a house. We did 8 stair projects and numerous painting and yard work projects, all completed in the week.

A fantastic time of worship, service and games was capped by our Client Night where clients expressed their gratitude for how we answered their prayers and how, by seeing our youth, they have renewed hope in America’s and our church’s future. Some people we met even talked about how they want to get back to attending the United Methodist church.

The photo above is of the entire group of 70. We stayed at First UMC in Claremont - this is their newly purchased building. This is a church of about 12-15 people with a part-time local pastor. They have gone all out for us for the past 3 years we have served in Claremont.

The North Ferrisburgh UMC heard from their team members in worship on Sunday, July 23. Click here for a link to a video of their message.

Hannaford helps to fight hunger. The St. Albans’ Hannaford Supermarket won the Helping Hands contest by selling more food boxes than any other Hannaford store in New England. The prize: a $3,500.00 donation to the Franklin/Grand Isle Community Action Food Shelf! This year, the St. Albans Hannaford sold 4,774 Helping Hands boxes. Though they missed their goal of 5,000, it was still enough to win the contest for the 5th year in a row! 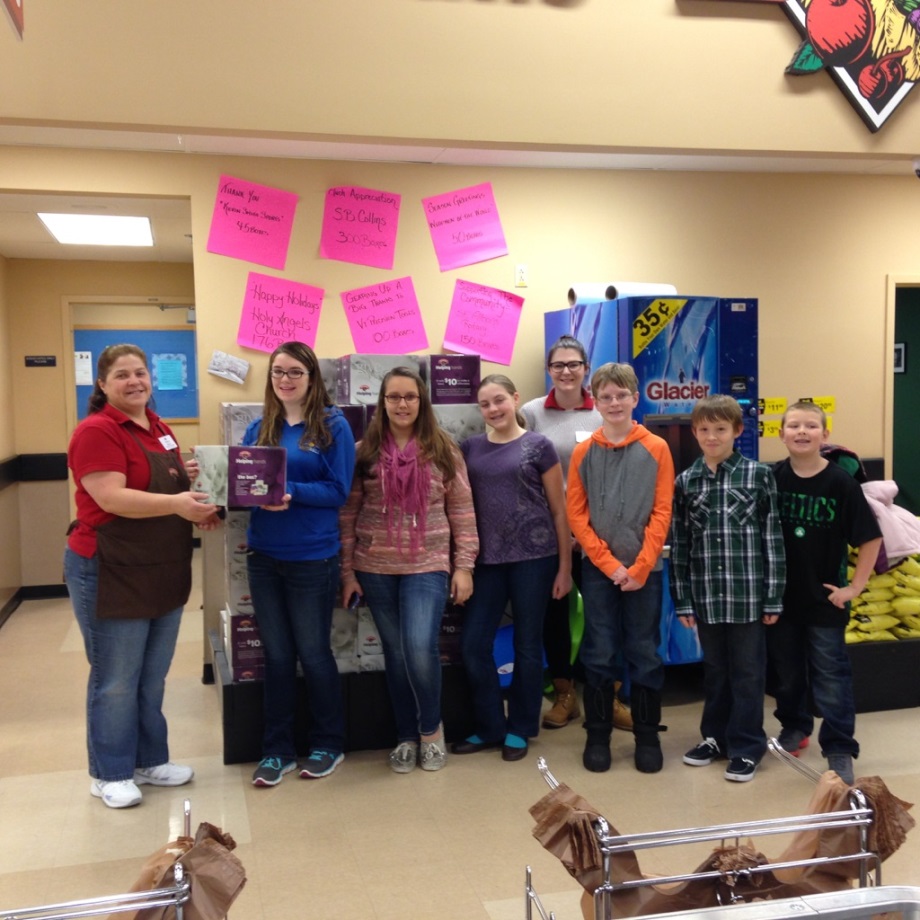 On the first Saturday of the month four times a year, volunteers have been gathering at the Shelburne United Methodist Church, 30 Church Street, Shelburne VT, to assemble and verify health kits for UMCOR.

There is an on-going need for good quality hand towels and washcloths (no dish towels or microfiber cloth, please).

Here's the story of their first party:

The Green Mountain HUB held its first official kit party as a Mission Central HUB on Saturday, August 3rd, 2013, and it was a great success.  There were 15 volunteers making and verifying UMCOR health kits – folks from Shelburne UMC as well as North Ferrisburgh UMC, First UMC of Burlington, and Wesley UMC of Waterbury. The volunteers put together 150 health kits in just over an hour! A big thank you to all who participated by either volunteering and/or contributing kit items.
If you would like to join the Green Mountain HUB’s kit parties, they will be doing this on the first Saturday of the month from 9-11am in April, June, September, & November at Shelburne UMC. All ages are welcome – anyone can do it! Please join the Green Mountain HUB for some great fellowship as volunteers come together to create God moments.

How did this begin? Here's the rest of the story:

In October 2011, a group from Shelburne UMC ventured to Mission Central to do volunteer work. We did not know what to expect. We had no idea it would change our lives. We came back with a HUB-IN-A-FOLDER and never looked back.
In November 2012, we returned to Mission Central to do more volunteer work, and to commit our congregation to serve as a HUB for Mission Central.
As of April 2013, we are an official HUB! We will begin our work collecting items for UMCOR health kits. If your church is interested in participating in this project with us, please contact any one of our site coordinators. We host monthly kits parties on the first Saturday of each month and all are welcome!
We are also a collection site for the Champlain Valley area. If you have any UMCOR kits, cleanup buckets, special appeal items, etc. that need to get to Mission Central or UMCOR, drop them off at Shelburne UMC and we will see that they get to Mission Central for you. Please contact the Shelburne UMC Office Shelburne.umc@myfairpoint.net to coordinate a drop-off time. We are also willing to pick up items if necessary.

Six United Methodist Churches from the Vermont District and from the Wellspring MA UMC sent 34 volunteers to North Carolina to help with Irene recovery in that state April 20-28th, 2013. We stayed in a UMC Church Center in Bayboro, NC and helped six families recover from Hurricane Irene damage.
Volunteers ranged in age from 14-75 years of age. We had eight teens and the rest were adults on the trip. Both age groups often mentioned working with each other as a high light of the trip.

It takes communities a long time to recover fully from a hurricane, especially those who do not have much income. All those we helped were too poor to afford the repairs on their own and are dependent on volunteer labor.

Our projects were varied. We helped one woman complete the work needed on her home. 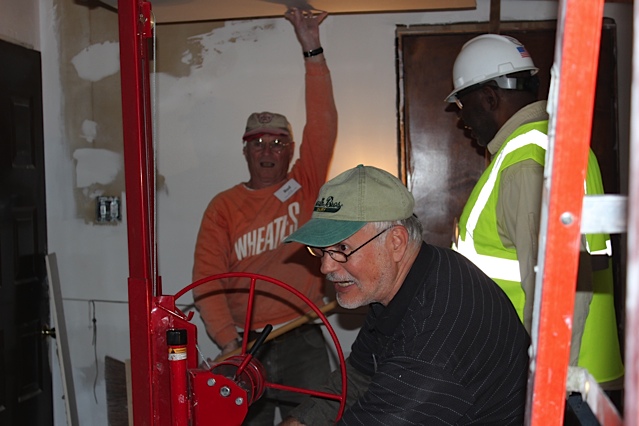 Then we presented her with a new sump pump when the one she had, quit while we were there. The South Burlington UMC funded the sump pump gift. The surprise gift for the homeowner, which came with someone from our team skilled enough to install it, was moving to all. The homeowner told them “She had endured many frustrations and delays but she was so moved by their unexpected gift that she now felt God had wanted her to meet them.”
We did extensive sheet rocking, and installed two bedrooms with flooring in a home that still has a ways to go before the owners can move back in. The owners worked with us as they could, each day. They were thrilled with our progress. 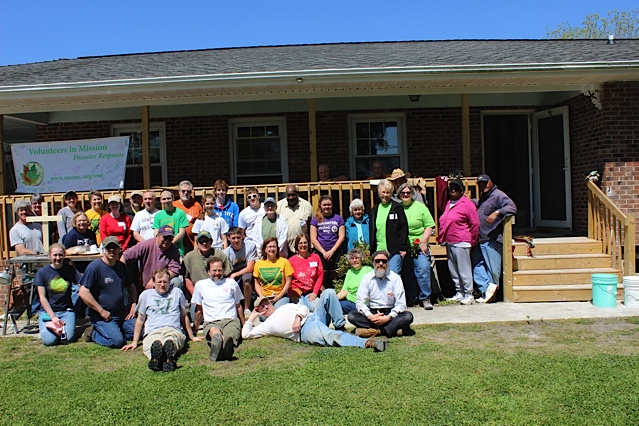 They were so glad to have met the over 15 people who worked on their home. We held our closing communion worship service in their yard on the afternoon of our final day of work.

We did extensive repairs on a trailer. Brush and trash was cleared from behind the trailer and that made a huge difference in its appearance. When the homeowner appeared at the end of the week, she was very grateful and overwhelmed with the transformation.
Other team members installed flooring, did some painting and built a new front entryway staircase for another elderly woman, nicked named Ms. Woo. Ms. Woo bonded with all her team members and frequently serenaded them with spirituals like “I’ll Fly Away.” Team members also completed roofing projects on two different homes.
It is now 18 months since these North Carolina homeowner’s homes were flooded by Hurricane Irene. Their patience and faith in the face of many hardships was inspiring.

The camaraderie that developed between the Mission trip participants with each other and the homeowners was a gift that all enjoyed. One teen on our trip put it this way: “I knew serving others was important but seeing the camaraderie that can form on a mission trip was magical. I enjoyed seeing the happiness of the homeowners. It made me feel grateful for what I have and gave me a sense of satisfaction when I saw the hope we can restore.” 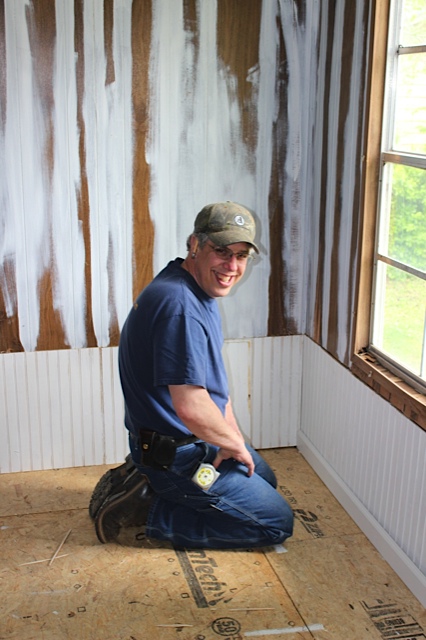 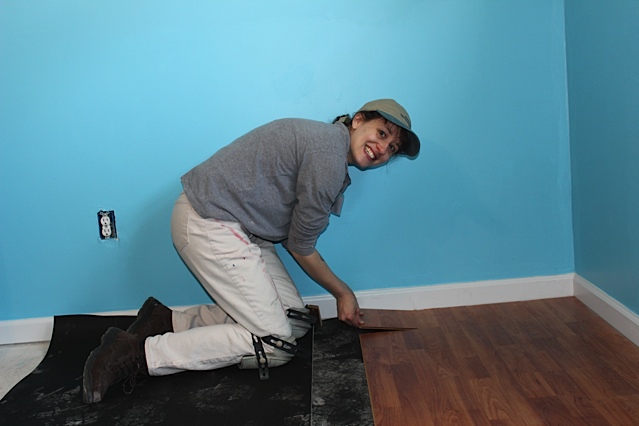 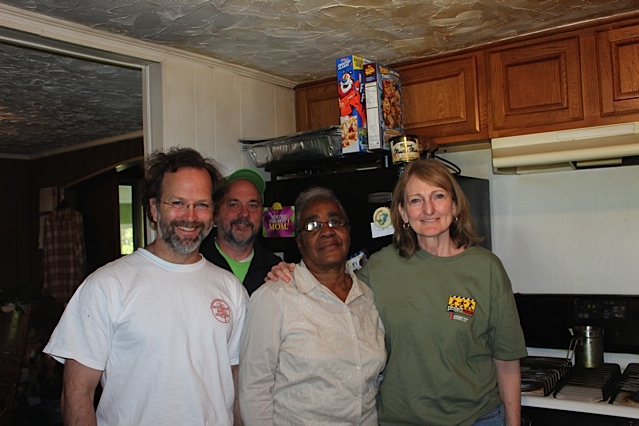 We made new friends, learned new skills, and worked hard. The hope we saw in the eyes of those we were serving meant that we received more than we gave. Everyone on the trip was very enthusiastic about all we accomplished and all hope to do another Mission trip.
The Vermont District of the United Methodist Church has been involved in many efforts to help Vermonters recover from Hurricane Irene.
The District supported the creation of MacKenzie House near Northfield, VT.  MacKenzie House, a small church that closed some years ago is now a Mission Volunteer center. It is where many Mission teams from out of state stayed last spring and summer, as they helped Vermonters recover from Hurricane Irene.
Two of the volunteers on the North Carolina trip, Pastor Charlie Magill and Ted Marcy, worked weekly for almost a year in the Mad River Valley area of Vermont (near Montpelier) helping individuals and businesses recover from Hurricane Irene.  They became known as “Charlie’s Angels, since they were organized by Pastor Charlie Magill. We still have around 300 work sites needing help in Vermont, but they can only be done when the weather is consistently warm.
The Vermont churches that participated in sending volunteers on the North Carolina, Hurricane Irene recovery trip are: Essex Center UMC, Pastor Mitch Hay attended with three teens in his confirmation class, North Ferrisburgh UMC, Pastor Kim Hornung-Marcy helped organize this trip and brought three teens and six adults, South Burlington UMC, Pastor Krista Beth Atwood came and brought five adults, West Addison UMC, and Williston Federated Church, Pastor Charlie Magill also helped organize the trip and brought three adults and two teens. We also had five adult volunteers from the Wellspring UMC from Massachusetts.
Green Mountain District