See an FAQ on the new district structure 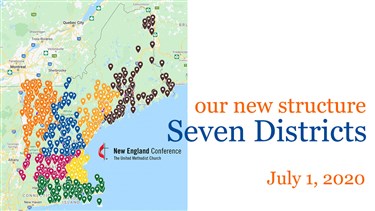 The 2019 Annual Conference approved reducing the number of districts in the New England Conference from nine to seven.

This page will provide information about the new structure and the transition process.

As you know, the 2019 Annual Conference approved a new district structure so that as of July 1, 2020, the New England Conference will have seven districts rather than the current nine.

As part of the restructuring, we made the decision to change the names of all of the districts. It is our feeling this will allow our congregations – both those that will change districts and those that would not have – to come together in this new structure on equal footing rather than as “new” and “old” churches or district members.

In considering the new names, we sought to find names that represented the district’s geography while being clear and descriptive. The name Freedom Trail was chosen for the district that will include churches primarily from the Metro Boston Hope District.

Since announcing the new name, we have learned that “Freedom Trail” is trademarked. While the foundation that operates this Boston landmark may well have given its permission for us to use the name, we felt it was best to avoid any confusion and potential entanglements that could result from using this as a district name.

We will continue to update the FAQ and new structure information as developments happen, and will keep the Conference informed about the progress of the transition.

Restructuring will be an ongoing process for a while yet, and our willingness to be flexible as unanticipated issues arise will be important to making things go smoothly.  Please keep the transition team, our Conference and The UMC in your prayers.