Wikipedia describes Richard Rohr as "one of the most popular spirituality authors and speakers in the world."

When Rolling Ridge Retreat and Conference Center hosted a simulcast of the 2018 Conspire Conference from the Center for Action and Contemplation (CAC), which is led by Rohr, the level of interest seemed to support that notion.

Lawrence Jay, Rolling Ridge executive director, said within the first 24 hours, 23 people had registered for the event, which drew about 50 people; 30 on each of the three days (Aug. 31 to Sept. 2). Many others, Jay said, emailed to express their interest in more Richard Rohr events.

Jay said the simulcast spawned a desire to meet regularly as a community to continue to process through Rohr’s teachings.

Kris Girrell of Andover, MA, was at the simulcast and the first small group gathering.

Girrell said he considers Rohr “to be my teacher.”

“I’ve been out to CAC a bunch of times, including being a graduate of a two-year program called the Living School,” he said.

Girrell was drawn to the group, he said, by “a desire to be amongst other people who [are] on path of spiritual development that goes beyond the traditions of any particular sect and into what Richard calls the perennial traditions; the traditions that are true of all religious and mystical experiences, which is kind of a unity of consciousness with the divine.”

The first gathering of the “Rohr Action and Contemplation Small Group” took place on Oct. 7, 2018 – a day after the controversial confirmation of Supreme Court Justice Brett Kavanaugh. 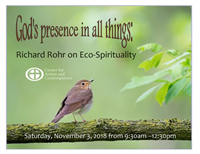 Rolling Ridge will host a screening and discussion of “God's Presence in All Things – Richard Rohr on Eco-Spirituality,” 9:30 a.m. to 12:30 p.m. on Saturday, Nov. 3, 2018. The video is part of Father Richard Rohr’s DVD series “Embracing an Alternative Orthodoxy.” Learn more

Join the “Rohr Action and Contemplation Small Group.” Rolling Ridge Executive Director Lawrence Jay describes it as “a drop-in group for anyone interested in Richard Rohr or in finding a community in this spiritual-but-not-religious context in which we live.”
The group meets at 3 p.m. on the second Sunday of each month; sessions are about 90 minutes.

“ … to have evangelicals, Catholics, United Methodists and other mainline Protestants, and the spiritual-but-not religious join us reflected the diversity of people who are seeking community within this culture in which we live.”

Despite their differing backgrounds, Jay says the group was processing similar feelings in the wake of the Kavanaugh vote. “There were a lot of people who had a lot of angst and a lot of concern about what to do,” he said.

The group used Rohr's Oct. 7 daily meditation titled “Dying by Brightness," as the basis for their discussion.

We read the mediation like a Lectio Divina – we read it, people shared about it, we read it again [three times], and people continued to build upon the conversation, Jay said.

One of the common themes, Girrell said, was “we’re taught by our main teacher, this guy Jesus, to embrace the other – not just the other person that you know and like, but the other person you really don’t want to embrace: the executioner, the Führer, whatever it is that is the vilified other … “

In a national climate that is so divisive and polarized, Girrell said, we are no longer having conversations; “it has degenerated to a level of two tribes throwing rocks at each other – and in that, all kinds of people are hurt.”

The Rohr group was, Girrell said, “an open space where we’re talking about a reflection that points us toward oneness juxtaposed against a political event that had a lot of emotional charge to it for men and women.”

Jay said that while most in the group were dealing with grief around the confirmation, they also recognized that there are diverse views among those in their churches and ministry contexts.

“It really became an opportunity for those in pastoral ministry to find some of the spiritual support they needed during at that time … and to talk through what this all means for them personally as well as in ministry,” he said.

While Evangelicals and Catholics are often pitted against each other because of some of their theological traditions, Jay said, at the small group “there was definitely a streaming together, a weaving together that I think provided a richness as people were able to overlook the differences and to see there was a commonality found in love of God through Christ.”

Jay spoke about what he hopes will grow from this first gathering.

“My hope is that we can continue to build a sense of community among the various spiritual traditions and to be able to find a sense of unity amid our diversity,” Jay said. “It’s an opportunity for the church to be the church by creating a safe space for people to come and to be encouraged and supported, but also spiritually and theologically inspired and challenged.”

The simulcast and this small group are also the first steps in a potential partnership with the CAC.

“Rohr turned 75 this last year,” Jay said, “and the ministry is in the process of discerning what the next step needs to be and … they’re looking into what regional expressions of CAC might look like.”

It’s possible that Rolling Ridge could become a “hub or satellite for their ministries,” Jay said.

“When Lawrence announced that he wanted to build a partnership – I said, ‘Count me in,’” Girrell said. “I want to do anything I can to make sure that happens, because while I love going out to Albuquerque, it would be fun to have ‘East Coast campus.’”

Beyond that, Girrell said he wants to be part of what he called Jay’s “powerful vision” for Rolling Ridge.

“My understanding of how vision works is that it will move mountains,” he said, “Just stand back and watch or be part of it, but don’t get in the way because this man’s got a vision, and it will work, and I want to be part of making that work. You want to go someplace? Go where Lawrence Jay is.”
Current News Releases and Articles