While many of the people Sarah Ames met in China on the 2016 Mission of Peace spoke English, music was really the language she had in common with these Christians from the other side of the world.
Ames, 17, is a high school senior who wants to be a music therapist.
The group visited a number of churches, and, Ames said, when they sang Wesleyan hymns the group recognized, they were able to sing along in English.
"For me, it was the music that really connected with me," she said. "When we were singing, even though I didn't understand the words, I got the melody line. Even though I didn't understand the language it was being sung in,  I understood the language of the music. I closed my eyes and listened to everybody singing …"

The trip was also a chance to hear some traditional Chinese music, Ames said, which uses the pentatonic scale, "so that kind of intrigued me;" though much of the music they heard was more contemporary.

The 2016 Mission of Peace took place Dec. 28, 2015 to Jan. 15, 2016 and the group of youth and chaperones from around the Northeastern Jurisdiction traveled primarily to major cities such as Beijing, Shanghai and Nanjing.

She also talks about the New Year's Eve celebration, she said.

"We were at this church and we were sitting in the first couple of pews – it was really cold because the churches were unheated – and this woman came up and started singing, and suddenly I wasn't cold anymore; I wasn't shivering anymore," she said. "I was strangely warmed by God, perhaps. That was the first full day of the trip, and it that kind of experience happened throughout …"
Ames had never been on an airplane before this trip, and admits to being a bit apprehensive.
"But then when I got there, I fully was in the moment and I just let go and let God, and I was able to not worry about home as much, " she said. "It wasn't too hard. It was good practice for me, because I'm going to college next year."
She definitely wants to travel more, she said; in fact, she'd like to travel as part of her work.
"As a music therapist, I'd love to be on a trauma team and go with UMCOR or something like that," Ames said. "Because music kind of unites a community that's in the midst of disaster."
Ames described a musical connection she made as "one of my favorite moments."
"Their musical notation is different than ours – it's a number system; it's very different," Ames said. "I was sharing a hymnal with a woman sitting next to me, and she saw that I was really interested in the notation; I was trying to figure it out. And at the end of the service, she gave her hymnal to me, which I thought was really, really sweet and I was touched by that."
The hymnal (and a traditional Chinese dress she had tailored for herself) were not the only things she brought back from this journey. She returned with a stronger faith as well.

Learn more about the Mission of Peace

Get an application form

Send applications to Rev. Erica Robinson-Johnson, Director of Connectional Ministries and Assistant to the Bishop, at erica@neumc.org.

"I'm a pastor's kid – so I've always had a strong faith," said Ames, whose father is Daniel Ames, pastor at Grace UMC in Essex Junction, VT,  "but a lot of people think it's because my dad's a pastor. On the Mission of Peace, I was able to not worry about that and really open up to my faith; I was really able to let go and let God. (My faith) definitely grew stronger."

"When people I was sharing the trip with, when they shared their life stories, I could really connect with them and really work through that with them – and that was pretty amazing," she said.

Asked what she would say to someone considering applying to go on a Mission of Peace, Ames said:

"I would say Mission of Peace is for everyone. On the Mission of Peace, I was set free and able to be completely myself," she said. "Everybody should go on a Mission of Peace;  you learn so much and get so much from it. It's unbelievable; it's life changing. 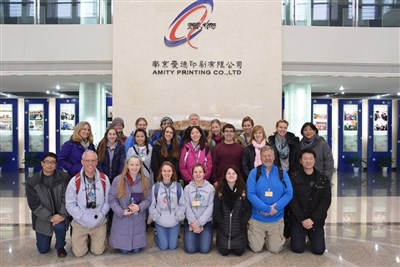 Click the image to see a larger version.
Current News Releases and Articles