The third annual New England Justice for Our Neighbors (JFON) Dinner and Auction celebrated the reopening of the legal clinic in Woburn while reminding people of the increased need for its services – particularly in the current political climate.

The evening’s emcee JFON President Gary Richards cited a recent Boston Globe article on the Trump administration’s failure to extend Temporary Protected Status for many immigrants – including those from El Salvador, Honduras and Haiti who could see their status rescinded over the next six months.

“We want to remember that when we go forth from this place, from this celebration, that we have a lot to do to continue to struggle for immigration rights and justice as well as to be welcoming congregations and communities,” Richards said. “And to let our neighbors know that they’re not alone in this journey.”

JFON works with immigration attorneys to provide legal services for asylum seekers and immigrants seeking to regularize their status.

Bishop Sudarshana Devadhar offered his greetings to the gathering, and thanked everyone for their support of JFON’s ministry.

The event was held Nov. 11, 2017 at St. John’s Korean UMC in Lexington, MA. Along with the opportunity to bid on donated items to benefit JFON, guests dined on cuisine prepared by members of St. John’s and members of Assembly of God Brazilian Church, which shares the building with Woburn UMC. Assembly of God members also provided the table decorations. Desserts were provided by JFON board members.

Richards announced that the Woburn clinic, which has been closed for two years for reorganizing and sustainability work, will now partner with Northeast Justice Center in Lawrence and Greater Boston Legal Services.

Attorney Ethan Horowitz, managing director of the Northeast Justice Center, commended JFON and its supporters saying he believes a society is judged by how it treats strangers. He quoted from Leviticus 19:33-34:

“The Northeast Justice Center is not a faith-based organization,” Horowitz said, “but I firmly believe that each and every one of my staff members needs to have a good deal of faith to do what we do every day, to see the trouble and the pain and the heartbreak that we see every day and help a small portion of that, and wake up and do it again the next day.”

“God bless you all, he said, “You’re doing the Lord’s work, and please keep it up.”

The Woburn site plans to host 18 clinics in 2018 – each with at least one attorney present. The clinics have been fully funded, Richards said, and additional funds will be dedicated to 2019 clinics.

“I’ve heard from a wide range of individuals that fear is at the core of what so many people in the community are feeling right now,” Zellner said.
And she said it’s not just those who don’t have status; those with green cards, “who have been part of our community for years” are asking: “What should I do to keep me and my family safe?”

It’s critical that people know their rights and know what services are available, Zellner said, so they are less likely to become victims of the unscrupulous who promise a quick fix to their immigration issues.

The JFON dinner is also an opportunity to hear immigrants’ stories first hand. One of Zellner’s clients is Rudy, a shy young man from Guatemala, who talked about his experience crossing the border alone at age 11. His parents had both died, and he dreamt of a better future in the U.S.

Crossing into Mexico then on to the U.S. border was frightening and difficult, Rudy said. After two days on a train without food, he ended up in a juvenile detention center. A social worker connected him with an uncle in Boston. But his uncle was more interested in putting Rudy, 13, to work in his restaurant than in raising him.

Rudy hopes to become a writer or an actor, and has not given up on those dreams.

“This country is willing to give me a chance, but there are many hardships,” he said. “I know there are other children who are like me; they are alone. I hope that by telling you my story [they will get] a chance to get help.”

Rudy is close to getting his green card, Zellner said, and she commended him for his bravery in sharing his story.

The evening’s final speaker was Elizabeth, who also spoke at last year’s event. She is one of the 800,000 young people seeking to regularize their status through the DREAM Act, which stands for Development, Relief, and Education for Alien Minors.

Since she was last at JFON, Elizabeth, who came to the U.S. as a 5-year-old, has graduated from nursing school, passed her licensing exams, and gotten a job. But she is not as hopeful as she was just a year ago.

“Today, I don’t come here with a hopeful heart. I come with a heart in mourning for a future that I had planned,” she said, adding that the uncertainty has tinged all of her accomplishments.

For some covered by the DREAM Act their status could end as early as March 2018; others have a year and some, like Elizabeth, two years.

“People keep telling me have faith, but it’s hard,” she said. “It’s been 23 years waiting for something to happen. So today I come here to tell you a little bit about what’s going on in my heart and to ask you to speak up, to have a voice and to use it, because I can’t anymore.”

Fear about losing their status, Elizabeth said, means she and others in her situation are less likely to speak out.

“We need you to speak up, to fight for us, to love us, to hug us, to give us words of encouragement and to treat us like human beings,” she said. “We need you to be our strength right now and our voices.”

To learn more about JFON, visit the website http://www.newenglandjfon.org 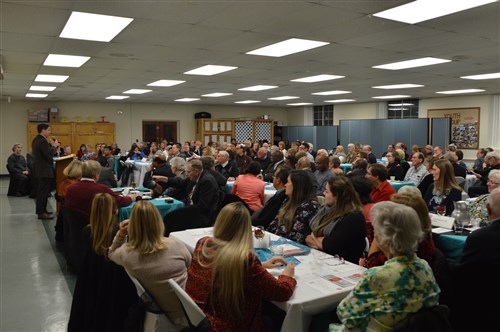