Finding silence and connection at Taize

Kim Yeasir was 29 when she made the pilgrimage to Taize in 2014. Taryn Drigo, 15, made the trip in 2015.
Both say they sought the experience as a chance to have time apart – away from the day-to-day life of work and school.

And both said they wanted time to pray.

Yeasir was in the midst of a discernment process. Drigo had just been confirmed.

“It can be deepening,” Yeasir said of the Taize experience. “(Whether you are) confident in what you believe or have a lot of questions – or (going through) some transition – it can be helpful to pray about it.

The silence at Taize and that time apart offered the chance for Yeasir to pray and listen to where God was leading her, she said.

“It helped me think about my life more,” said Drigo, a member of Parkway UMC in Milton, MA, who said Taize offers the chance to take “a bigger look at your life; you have a lot of time to yourself to think.”

Taking that quiet time is something Drigo said she “wanted to do for a long time but had not been able to.”

Rev. Rick McKinley, New England Conference Director of Congregational Development, has been to Taize three times as a chaperone.

“It’s a profound experience,” he said. “It’s such a different rhythm of work and worship – not to mention the opportunity to be with such a diverse population: 4,000 people from all over the world. We don’t have that immersion experience in the U.S.”

McKinley’s seen the transformation that happens, particularly for teens, after a week at Taize.

When he asks teens why they decided to make the journey, they often say they wanted to go to Europe or thought it would be cool. “Nothing about the experience,” he said.

But by the end of the week, “they are bubbling over about this amazing experience.”

They respond to the worship – during which there is no preaching and they sit on the floor and sing in languages other than English – despite it being foreign to them, McKinley said.

“They start talking about what it’s like just to be here with all these different people,” he said. “They begin to talk about experiencing the presence of God.”

The trip includes a one-day stop in Geneva, Switzerland, is designed to help traveler adjust to the time change and ease the transition to Taize, where the lifestyle is a simple one. Pilgrims sleep in dorms or tents, and the meals are filling but basic. McKinley said he tries to prepare those going for the first time for that experience.

“I set the bar low,” he said. After hearing that talk, Drigo said: “I expected it to be worse than it was.” She was concerned about not being able to use her phone, but ultimately: “I didn’t have a problem with it. I thought it was nice.” She recalled one of the brothers commented that it was probably good to have low expectations and be pleasantly surprised.

McKinley admits the experience is designed for young people – “there’s a lot of sitting on hard surfaces,” he said; but Taize has just raised the age limit for those who can attend to 35.

Yeasir admits she probably had more in common with the chaperones than the teens on her trip.

“I think we’re asking different kinds of questions,” she said. “Oftentimes, once you’re finished with school with all that is happening in your life and with work and family, it’s hard to set time apart for God.”

Setting aside that week can be “really formational, deepening you relationship with God” and allowing for “reconnecting or connecting in a new way,” she said.

McKinley agrees: “The reaction is different depending on the age. For 15-17 year olds, it’s eye- opening kinds of stuff. For 20 somethings, even the older adults that go, it’s either a clarification of call affirmation of call.”

Yeasir said the experience helped her understand her call was not to serve a local church, but to work with those “on the outskirts of society.” She is in the process off starting a nonprofit called THRIVE Communities of Massachusetts, which will help those coming out of prison reconnect to their communities.

Like Drigo and Yeasir, many who go to Taize seek time apart (Yeasir spent two days in silence), but Taize puts intentional focus on community – and with visitors of all faiths from around the world, it is truly a global community.

“The big, hairy, audacious goal is the solidarity of humanity around the world,” McKinley said. “We are one people created by God. (The brothers have) created a space where those from all walks of life can be safe to experience reconciliation.”

Peace, reconciliation and justice are the themes at Taize, he said.

See a video created by McKinley during the 2015 pilgrimage


When you go to Taize, you are immersed in this idea,” he said. “You experience solidarity with people – of multiple faiths or no faith – and a commonality of human experience … through a very Christian experience of worship.”

For Drigo, meeting as a small group at the end of each day made her feel connected.

“We would talk about the experience and hear what others were going through,” Drigo said. “We shared troubles and good things that we were going
through. We had laughs and stuff; it was good.”

Asked what she brought back from Taize, Drigo said:

“I think it helped me with praying. It’s something always did, but not as much,” she said. “… I prayed about one thing, then I was done. At Taize, I would sit there and think about all the other things … God and things you want to do in the future.”

Now that she’s back home, Drigo still takes some time to turn off the electronics and “sit and pray and think about stuff.”

Yeasir admits you don’t have to “go half way across the world” to find the peace and clarity she found at Taize, but she would encourage others who are seeking or in a time of transition to consider making the trip.

“What is helpful about the Taize community is that they are so intentional about how they live. They articulate their beliefs in a form that’s welcoming to everyone,” she said. “For someone thinking about going to Taize, I would encourage them to do it, but not to put a lot of expectations on the table; go and receive what is there.”

“There’s a lot of joy,” McKinley said. “There are so many things happening that are un-programed – informal gatherings, amazing conversations. People play, laugh, and work together; it’s cool to watch and be part of.” 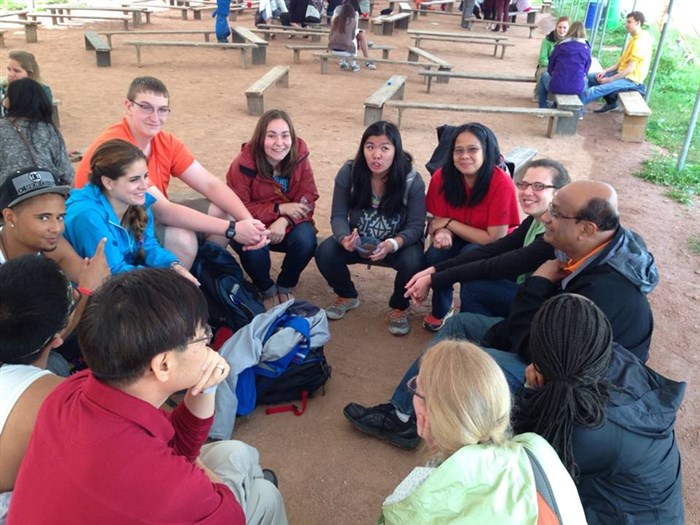