At the first gathering in the New England Conference’s new Training Center at the Methuen offices, the Connectional Table hosted its annual retreat with the leaders of the Conference’s boards and agencies on Sept. 28-29, 2018.

Special guest for the retreat was the Rev. Kennetha Bigham-Tsai, Chief Connectional Ministries Officer for the Connectional Table of The United Methodist Church. Rev. Bigham-Tsai is an elder in the West Michigan Conference, where she most recently served as Lansing District Superintendent.

The fall retreat is designed to offer leadership training and to help Conference boards and committees set priorities  and goals.

In the past, to be effective church leaders simply had to “maintain stability,” she said.  Attending church was the expectation, and the prevailing wisdom was “Keep the doors open, and they will come,” Rev. Bingham-Tsai said.

But the environment is changing, she said, and a look at the biological world shows that species that fail to adapt to their changing environment end up in decline.

So at a time when the church is often seen as irrelevant, leaders need a new set of skills, Rev. Bigham-Tsai said, and quoted from Adaptive Change Advisors:

“The skill set needed for today’s leaders is ‘… to build peoples’ will and skill to step into uncertainty together with discipline and build their tolerance for disequilibrium.’”

Leadership is not a position or a title, Rev. Bigham-Tsai said, it’s “an activity.”

“It’s helping people to face reality and take responsibility for shaping a hopeful future together,” she said. “The assumption [in that statement] is that leadership is not just telling people what they want to hear.”

In her devotion at the start of the Saturday session, the Rev. Ho-Soon Han echoed those remarks.

Rev. Han spoke about an educational model that shows that when students are in their “comfort zone” there’s not a lot of learning or growth taking place. The same is true when students are thrown into the “alarm zone” where they feel panicked and fearful.

But in the “discomfort zone” - where students are faced with something that’s new or different, but also have a teacher who brings their presence, knowledge, and skill to deal with the students’ discomfort – “that’s where the most growth and learning happens,” Rev. Han said.

Likewise, she said, when they were in the alarm zone, He would gather them – as he did with the disciples in the Upper Room – and offer His presence.

“That’s how leaders lead,” she said, “They challenge [people], nudge them.”

His goal, he said, was to “make this as practical as possible,” and allow the boards and committees to do some of the work of preparing their budget requests by thinking about their goals and relating them to the Conference’s values and vision.

As part of its responsibility for the program budget, the Connectional Table is charged with ensuring that groups are functioning in alignment with the Conference’s five critical values.

“We’ve heard in the past, as this process has evolved, that people feel under-prepared for what has become a more rigorous process,” Dry said. “The expectations are certainly higher than they used to be, so we want to ensure that it’s a fair process and one that everyone feels equipped to take on.”

Co-Chair Joan Klein spoke to committee and board leaders about that values alignment, and reminded them that each board is organized under one of the critical values and has a liaison on the Connectional Table who can offer guidance and support.

In her role as Director of Connectional Ministries, the Rev. Erica Robinson-Johnson prepared a reference guide for leaders that includes dates and deadlines for preparing their budgets and for Annual Conference, resources available for meeting at the Conference office or via the internet as well as staff contacts and other information.

Pictured below Steve Dry presents a workshop on grant writing. 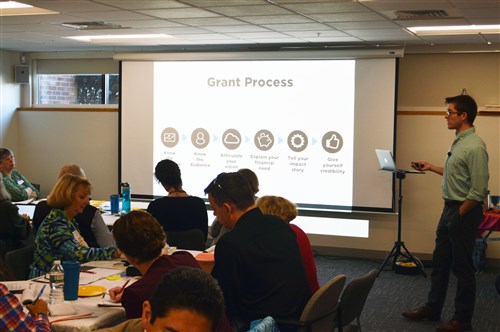