AC19: State of the Conference

As is traditional at Annual Conference, the dean of the Cabinet reported on the “State of the Conference.”

On Friday, June 14, the Rev. Rene Perez, who has served as the Central MA District Superintendent for the past eight years, gave the report on behalf of his colleagues.

He began with an apology: “I want to acknowledge the pain, devastation, disappointment, anger, and anxiety that General Conference’s decision has inflicted in so many, especially to our siblings in the LGBTQIA community. For our complicity, whether silent or voiced, we ask for your forgiveness.”

But the 2019 General Conference was not the beginning of that dissidence, he said.

“We must be honest,” Rev. Perez said. “We, as an Annual Conference, were already divided before General Conference. We have been struggling to understand each other for years.”

And while that struggle has taken a toll, which Rev. Perez described as “an 800-pound gorilla in the room … sitting on our chests, crushing us and asphyxiating us with fear of the other, ignorance, and retribution,” our differences are not just a burden or reason for despair.

“We do not think alike, look alike or love alike,” he said. “That is the beauty of who we are: diverse, multilingual, multicolor, multicultural, and polygender. … We, your Cabinet, believe that the people, from every corner, town, city and island of the New England Conference can stand united.”

Rev. Perez titled his address “It’s time to mend and build!,” and he said he believes New England United Methodists are up to the task.

“We can be strong and can stand united, facing the great responsibility to change our church into a church of justice, truth, solidarity and human dignity … for all people, especially for those who have been marginalized, wounded and excluded by years of flawed church polity and policy.”

“It is possible,” he said, quoting John Wesley describing the purpose of Methodism, ‘to spread scriptural holiness over the land’ without shrinking a person’s worthiness.”

Highlighting ministry taking place across the Conference, Rev. Perez said “For the vast majority of our congregations who have been engaged in meaningful and life-transforming ministry and missions, this [General Conference] has not deterred us from continuing.”

He pointed to: While New England United Methodists fight to build that “church of justice, truth, solidarity and human dignity,” Rev. Perez called on us to fight for the following as well:
Acknowledging the uncertainty facing the church, "We cannot remain silent," Perez said. He returned to the words of Salvadoran martyr Archbishop Oscar Romero who said: “Each of us has to become God’s microphone.”

Read the full State of the Conference address  - including highlights of ministry taking place in our districts. 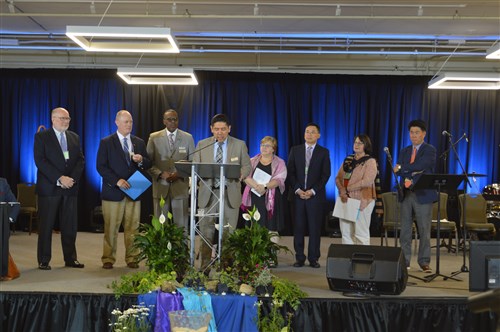